The US-China Trade War 101: What you need to know in 5 minutes 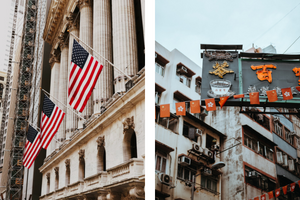 Before diving in, there are two things we’d like to disclose:

First, publishing this piece is tricky – what we know today could change (or even be reversed) with breaking news.  Parts of what you see here could have been rendered obsolete by today’s news headlines we haven’t read yet. Things are changing that fast.

Second, the spirit of gathering this information is to present facts vs. opinions. So if something below reads like an opinion; it was not intended that way. Our mission here is to provide a framework in which developments on trade can be more easily understood. One thing was clear as research got underway: the more we investigated trade, the more complex the issues became.

Why is global trade so convoluted?
The days of vertical integration are long gone. Today’s supply chains are complex, highly connected, and messy. They blanket the globe and unraveling them is almost impossible without hurting consumers.  In the old world of vertical integration, a price hike on one part could be absorbed by a price concession on another. But that doesn’t work today, where specialization is rewarded.  In the spider web of supply chains today, imposing a tax or tariff on one member of the supply chain forces a price increase to be passed on to the next, and ultimately to passed on to the consumer.

“Centers of excellence” for specific manufacturing competencies have migrated to regions with easiest access to materials, resources, and specialized skilled labor, trade by trade. As reported in the NYT, Michigan-based Lucerne “used to source more products from within the United States. But when the financial crisis hit, her [Lucerne’s] American suppliers started to fold, and the company had to look abroad.”  Today, China is the world leader in high-quality, low-cost forging, casting, and stamping parts. While not impossible, it’s hard to find specialty trades like these and many others in Western markets. Niche production transitioned out over decades to best in class producers all over the world.

What does the US want from China?
The US ultimately wants less friction when investing in Chinese business. A large part of this entails:

What does China want from the US?

What are the concerns on both sides with the trade deficit?
On the US side, America has run a trade deficit since 1975 and closing the gap in the near future is unlikely.  US consumers have higher purchasing power than Chinese consumers, for now. China’s middle class is booming – expected to expand from 430 million today to 780 million in the mid-2020s.  The gap is closing.

A number of large Chinese companies have already been affected by US actions. Two notable cases include the blacklisting of e-commerce giant Alibaba and a (temporary) technology export ban of one of China’s largest telecom company, ZTE.   Famous for sales of fake handbags, watches, and other counterfeited luxury goods, what has Western brands worried are instances of automotive parts, brake pads, airbags, and more – popping up on Alibaba as well.

What are the top IP flashpoints?
The US Government estimates that “IP-intensive industries directly and indirectly support 45.5 million American jobs, about 30 percent of all employment in the United States.”

Top US government concerns regarding IP include:

Given the number and magnitude of issues above, it is unrealistic to expect problems to be solved in the coming months.   China’s hunger for technology (and IP)  will continue for decades.  To accelerate high-tech industry in China, MIC 2025 was unveiled in 2015.

What does the MIC 2025 initiative hope to achieve?
China has reached a level of development where an economic growth model based on high-volume, low-wage production is no longer sufficient for long term growth.  Once known as the world’s low-cost manufacturing hub, China’s rising labor, social, and overhead costs have resulted in competitive disadvantages, especially in high-labor manufacturing sectors.  Countries in SE Asia are eager to close the gap.   The outflow of manufacturing from China isn’t limited to just clothing, textiles, and shoes.  Samsung’s 2 KM long plant is not in China, but in Vietnam.

In response, China announced Made in China (MIC) MIC 2025 to develop strategic, home-grown industries capable of competing globally.   China’s focus is on home-growing (independent of foreign investments) and building specialties in the following industries:

China’s success with the program depends on two things:  government funding and access to technology, since many agree that China cannot accelerate R&D fast enough on its own.   China had a limited window of opportunity to acquire foreign technology which has largely closed around the world.  Many governments, including the USA, have banned China from acquiring companies in key technology sectors.   According to AmCham, China has set aside $330 billion USD in a development fund to jump start key industries.

What actions can companies with China interests take?

Companies need a constant inflow of accurate information to thrive in China’s ever-changing landscape.  For example, which sectors are under threat for tariffs?  What options do companies have to mitigate risk?  Is manufacturing in SE Asia a smart move…now?  After 30 years in China, experts at CMD are well prepared to answer these questions and more.